What is a subcontract? In the world of Federal Contracting, and as defined by FAR 19.701, "Subcontract means any agreement (other than one involving an employer-employee relationship) entered into by a Government prime contractor or subcontractor calling for supplies and/or services required for performance of the contract, contract modification, or subcontract".

Let's look at some subcontracting numbers that have been reported in eSRS.  We can go back and analyze the awards from FY 2009 when only $662M was reported, to FY 2019 numbers which show $153B in subcontracts reported. The chart below shows a clear growth trajectory, which concludes that companies are getting better in reporting the subcontracts: 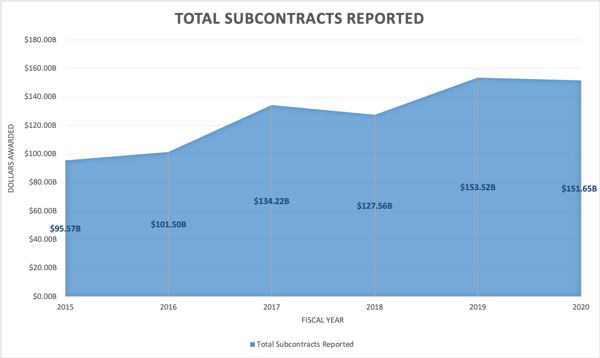 Source: Fedmine.US based on contracts reported within eSRS.  Data as of 7/6/2020.

No surprise that the Defense agencies are the top agencies, followed by GSA, NASA, Homeland Security, Energy and USAID:

Source: Fedmine.US.  Data as of 7/5/2020.  Click image for listing of all subcontracts reported by agency

Curious to know the top NAICS that the subcontracts are reported under? So was I. I was surprised to see Guided Missile & Space Vehicle Manufacturing the top NAICS with Ship Building and Engineering Services in the top five NAICS.

Source: Fedmine.US.  Data as of 7/5/2020.  Click image for listing of all subcontracts reported by agency

However, when we look at the subcontracts awarded as a percent of the prime contracts it's important to note that overall the reported subaward to prime contract award percent averaged 23.5% from FY15 to FY19, nowhere close to the 45% awards that have a subcontract plan requirement:

As we drill further into the transaction details within the Fedmine platform, we notice a few anomalies such as some subcontracts that were reported did not have a subcontract plan requirement, and many contracts that had subcontract requirements had no subcontracts reported. We definitely need better reporting from the primes, and of course better oversight is needed from the agencies, including the SBA.

If you would like to learn more about Fedmine or the information in this blog do email me at archisha@fedmine.us

Coming up next - Using Subcontract Data to grow your business, find teaming partners and more!